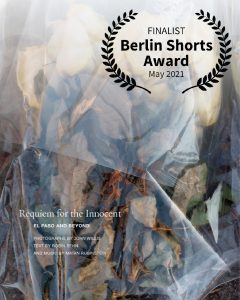 Congratulations to Robin Behn, CARI Faculty Fellow and UA Professor of English, for advancing as a finalist in the Berlin Shorts Film Festival, the Vancouver Independent Film Festival, and the Paris International Short Film Festival.

Her submission, Requiem for the Innocent: El Paso and Beyond, is a research project that addresses the tragedy of the mass shooting at the Walmart in El Paso on August 3, 2019 in which twenty-three people were killed.